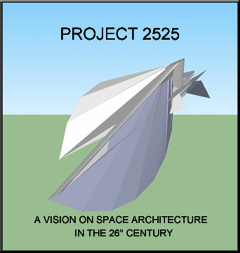 A VISION ON THE EXPLORATION OF SPACE IN THE 26° CENTURY

In the year 2525 man will look back on our oil age as on a fascinating but, in the light of world history, extremely short period of time. A period in which man had put too high a price, and became completely dependent on fossil fuels for the generation of his energy. An era where man dealt with his energy and his environment in an extremely careless and wasteful way. Consequently the man of the year 2525 will, in the absence of these fossil fuels, have to develop entirely new forms of energy. He will use techniques which are, in terms of efficiency and return, much more removed from our nuclear fission technology than this technology is removed from the techniques of the industrial revolution. He will realize the great dream of Albert Einstein, the fathoming of gravity, and will, this way, achieve performances, transcending our 21st century imagination. The fathoming of gravity will lead to energy sources enabling man to actually travel and exploit outer space. Power sources, reducing our contemporary rocket engines to nothing more than cumbersome and energy devouring monsters on which our descendants will look back as we do on the steam locomotives from the 19th century. Thanks to the exceptional speed of spacecrafts, driven by these superior power sources, it will be possible to bridge the distances between the various planets of our solar system in a time span similar to this which we currently need to reach the moon. The main challenge the astronauts of the year 2525 will have to deal with will be how to exceed the boundary imposed by the, until now, unbeatable speed of light. (Flying faster than our shadow is - as far as we can’t unravel the secret of Lucky Luke - not at all obvious.). Another restriction that the 26th century man will have to face will be his own physical limitations. As long as - as a result of evolution, or one or another bionic surgery - no exceptional and profound changes occur in the human body, he will have to take into account the, for our human body feasible, acceleration (and/or deceleration). A trip to, e.g., mars will, therefore, consist of a gradual and continuous acceleration which will (and this, after having either approached or even exceeded it the speed of light) halfway have to be converted into an equally gradual and continuous deceleration. An acceleration (and deceleration) that will, that goes without saying, sharply lower the average flight speed. This means that the objective will consist in, starting from zero kilometers per hour, evenly accelerating until (halfway) reaching or exceeding the speed of light and, subsequently, gradually slowing down in order to reach the intended destination with the speed of zero kilometers per hour. (Slowing down to zero kilometers per hour before reaching the destination would, obviously, be ridiculous!).

The ultimate exploration of space won’t, however, be confined to the exploration of the planets. It would be too crazy to leave the space between the planets unused. And that’s what  ‘PROJECT 2525 / THE - bio » « centric - SPACE ARCHITECTURE’  is about.

In the 26th century, man will, little by little, break loose of his planet and, literally and figuratively, take possession of the space between the planets. He will proceed to the creation of - bio » « centric - ‘compounds’ which, both in terms of technique ánd design, have nothing to do with the container-like creations our astronauts have to spend their days in. These - bio » « centric - ‘compounds’ will move through space in clusters and, this way, form true space cities. The design of these space cities will, as a result of the quasi unlimited aesthetic possibilities provided by - bio » « centric - materials on the one hand, and the technical possibilities provided by the absence of the, in terms of construction very restrictive gravity, on the other hand, be of an (for our 21st century imagination) unimaginable - omni ~ dimensional - beauty.

If you think that the ‘PROJECT 2525 / THE - bio » « centric - SPACE ARCHITECTURE’  is just an unattainable daydream of a stampeding space artist, you should consider how the contemporaries of Leonardo da Vinci would have reacted if someone would have told them that the ‘airplane' the grandmaster came out with (an airplane that even couldn’t fly) would, 500 years later, result in massive ‘monsters’ carrying more people than the average number of inhabitants of a renaissance village. ‘Monsters’ spanning (for the 15th century man) unimaginable distances at unimaginable speeds. Gigantic creations weighing a multiple of an oversized mansion and composed of materials far beyond their imagination. Flying giants whose components, heaven forefend, were stuck together with glue!

The - bio » « centric - constructions (‘compounds’)  referred to in ‘PROJECT 2525 / THE - bio » « centric - SPACE ARCHITECTURE’ will, given their purpose, be of such a size that they are impossible to be built in 21st century materials. Given the huge quantities of materials required to build such gigantic constructions it will also be impossible (and this despite the technical possibilities of the 26th century) to fly in those materials from either our or another planet. The necessary materials will consequently have to be conceived and created on the spot. Materials of pure organic nature. - bio » « centric - materials with a proper ‘genome', composed and pre-programmed by man.

The bio-engineers will not only have to develop totally new materials out of these self created and pre-programmed ‘genome’. They will also have to conceive primeval cells which can be brought into space by means of relatively small spaceships. Primeval cells which will, thanks to weightlessness, steered by their pre-programmed ‘genome’ and fed by solar energy, grow in a relatively short term, into complete - bio » « centric - ‘compounds’.

All this may seem a crazy idea, but if we take into account the supersonic speed the computer technology mixed up our society ánd our world, ánd the fact that knowledge in general and the resulting technologies in particular exponentially develop, the ‘fiction’ of ‘PROJECT 2525 / THE - bio » « centric - SPACE ARCHITECTURE’ could easily be surpassed by the reality of the 26th century.

Thanks to all these - bio » « centric - developments the designers of the 26th century will no longer be subject to the limitations of the materials our contemporary space ships are built with and, this way, be able to develop a true - omni ~ dimensional - architecture. An architecture that will leave our three-dimensional design and conventions far behind. This high-tech development will not only lead to an unprecedented evolution in the architecture, it will also result in a gigantic economic and cultural explosion.

Alike Leonardo da Vinci in his time, we, in our time, aren’t able to materialize our ‘dreams’ for lack of the right materials and techniques. I, therefore, don’t consider it my task, let alone my ambition, to materialize my ‘dreams’ within the short timeframe of my stay on this planet. I, on the contrary, consider it as my duty to put the me allotted fantasy at the service of this wonderful universe, and, to conceive ‘worlds’ and visions, unhindered by the ballast of technical worries, - bio » « centric - and - omni ~ dimensional - ‘worlds’ and visions, scientist can’t, given the pressure of work and the limitations of the contemporary techniques and materials, deal with. I am convinced that the cooperation between imaginative artists and driven scientists will, similar to the past, form the basis of unprecedented developments. Developments in which ‘buildings’ will contain no more computers but be, themselves, an integral part of the universal - bio » « centric - and - omni ~ dimensional - computer. ‘Buildings’ whose outside walls will, alike the human skin, respond to the environment in which they are located, and, depending on the necessities, let through more or less light and/or heat. ‘Buildings’ whose walls, windows, doors, etc. , will be no separate elements but interacting components relating to the ‘building’ the same way our limbs and organs relate to our body. ‘Buildings’ which will, as a result of the almost unrestricted possibilities of the - bio » « centric - materials ánd the absence of natural phenomena peculiar to the climate on our planets, be of a exceptional and - omni ~ dimensional - beauty. Constructions which will form the basis of the unlocking of the intergalactic space and lead us into the time and space transcending splendor of the - omni ~ dimensional - universe.

In conclusion I wish to remark that designers of the 26th century will, in order to make life in the black hole of the desolate space, far away from the familiar terrestrial landscapes, psychic livable, have to attach the utmost importance to the creation of imaginative, aesthetically and variable compounds and ‘landscapes’. Compounds and ‘landscapes’ which will stimulate the senses of their inhabitants sufficiently, not to fall pray to the often predicted mental depression as a result of an unbearable feeling of loneliness. The external appearance of the - bio » « centric - compounds will, therefore, be just as important, if not, more important, for the inhabitants of the surrounding compounds than for its own residents. There will also be need for powerful laser cannons to provide the space between the various compounds with - omni ~ dimensional - ‘works of art’ that will technically be comparable to the - bio » « centric - space paintings from my ‘EVOLUTION NUMBER FOUR’ - ‘THE TRANSCENDING'. Holographic works of art that will constitute a genuine and multicolored space ‘landscapes’. This way the boundaries between the virtual and the material ‘world’ will completely fade, the virtual ánd the material universe will entirely merge. Real - bio » « centric - ‘space cities’ will arise. ‘Space cities’ whose residents will (in order to break the claustrophobic effect and the interpersonal conflicts resulting from a prolonged stay in a - bio » « centric - compound) move from one compound to another in mini space vehicles. Space cities forming the base of an - omni ~ dimensional - civilization transcending our three-dimensional civilization in all respects.

A VISION ON THE EXPLORATION OF SPACE IN THE 26° CENTURY